Topic should be types of Atkins saws, and posts are related to those saws
BUTTON_POST_REPLY
4 posts • Page 1 of 1

In Cascade Idaho, the D-9 Grocery has saws and axes and peavies hanging from the rafters. One of the saws is a beautiful Atkins 556. 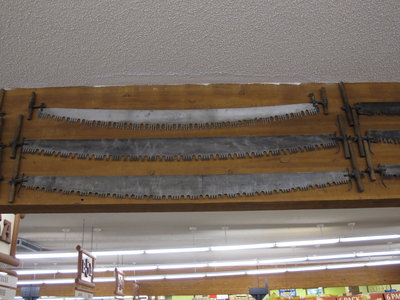 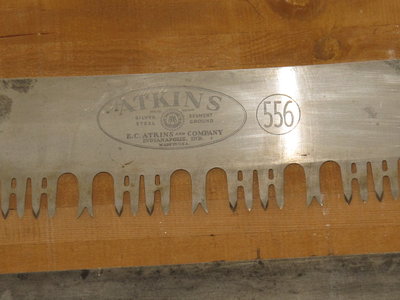 So out west you can just pick up a NOS saw at the corner store?
Josh
Top

Don't I wish. Recall Boise-Cascade. They are still around and headquartered in Boise. They had their mill in Cascade on the banks of the North Fork of the Payette River but closed and dismantled it years ago. The woman who owns the store hung saws and other lumbering memorabilia that belonged to her father from the beams in the grocery store.

There may be nine saws in all and they look to be western bucking or felling saws with western handles and are more than six feet long. Without climbing onto the rack holding the potato chips I could only make out a logo on the Atkins
Top

That cracks me up. I live in McCall, 30 miles from Cascade, I have talked to the owner (now deceased) about those saws and no sale. But they did come from the woods in the area, used on the Ponderosas and Doug Firs.
Top
BUTTON_POST_REPLY
4 posts • Page 1 of 1