Topics should be types of Simonds saws, and posts are related to those saws
BUTTON_POST_REPLY
4 posts • Page 1 of 1 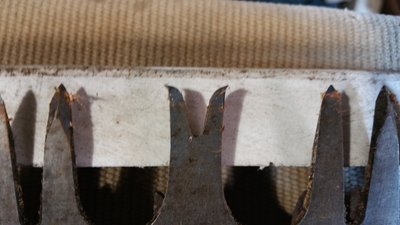 Simonds made a California Redwood saw. the Saw i have came from the Yeager Saw Camp. hope all can see the different filing on it than others. 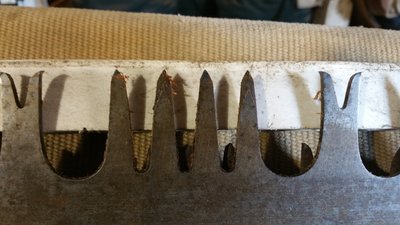 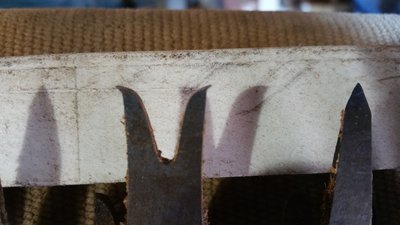 Raker close up. see the really deep valley in the raker.

Any logo on your saw?

I've never seen any build up of cuttings between the raker tips but maybe for very large cuts they figured they needed then deeper V.

In the Simonds 1912 catalog they show a Sequoia Chief #516 for redwood. It has two cutters between the rakers and they sold them in lengths up to 20 feet. For longer saws they could braze them together.

Are you sure its a Simonds?
I also have a Yeager redwood saw (14 foot) and it still has the etch showing an Atkins 67 (see pic).
Also have a 10 foot saw from the same group and after cleanup it shows an Atkins 52 etch (I think

.
Both saws have similar shaped teeth and the 10 foot has an 0.025" set on the cutters!
They are both very sharp as I heard they were all sharpened and ready to go when the camp was closed.
I have single bucked with the 10 foot saw and it cuts very well as is. 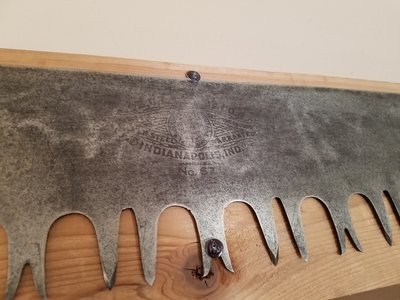 As far as i know it is a 8 ft Simonds California Redwood Bucking saw. i have a 10 ft California Redwood bucking saw now also.
i got both of my Redwood saws from the Axe Hole in Washington. He said he bought them from the Yeager Camp when it closed.
you can go to the Axe Hole website and see his inventory.
i also have a Saw i bought on Ebay and after i got the 8 ft Redwood saw i looked at both and they were very similar.
All of my saws have four thin Cutting teeth and the deep V-cut rakers.