I am Going thru Doc Jastad's bucking and felling saws and came across a 5 foot Marshall Wells bucking saw, maybe filed a couple of times. Doc is now in the Soldiers Home in Orting, Wa but his mind is still sharp when it comes to the past so i asked him who made the Marshall Wells two man bucking saws. He said that at one time they were made by Simonds for Marshall Wells and patterned after the Simonds 503 Royal Chinook. All of his vintage books are gone which is where he said he got the information from. Can anyone out there confirm this

I've not seen many and only have a couple "hardware" saws but have never seen any that are up to the quality of a Royal Chinook. If the Marshall Wells was a rebranded 503 it should be easy to tell. Here is kind of what I use to ID a 503 without a logo: 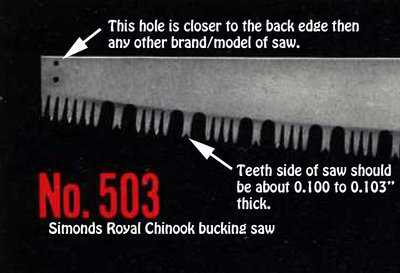 Here is a 6 1/2' Marshall Wells. The holes are quite different and the site does not give the thickness. 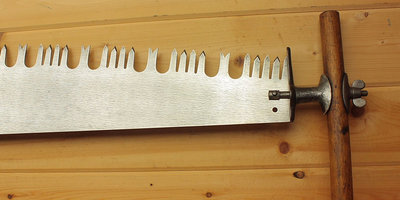 I have a 6 foot Marshall Wells and the tooth spacing is the same but the tooth thickness is only about 0.090 where the 503 teeth are all about 0.102. 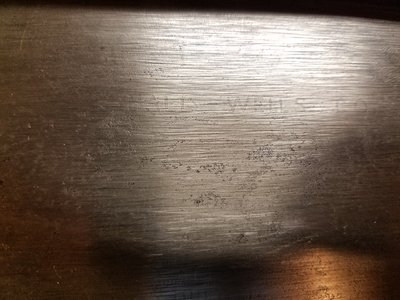 Clarification, need to add dimensions for handle holes are edge of hole from back of saw. 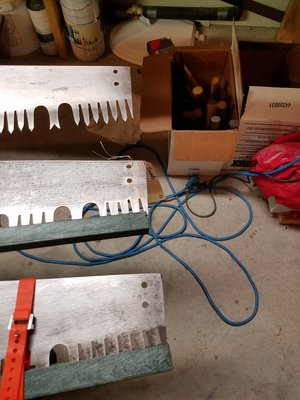 This topic has been quiet for a while but was pointed here in looking for information on one-man 4-1/2 foot Marshall Walls bucking saw. Is it Walls or Wells? Was it patterned after the 503 as well or another Simonds model?

Did some cleaning the side with the etch last night. The M is not visible on this saw. It has a rounded top D handle with a medallion for the center bolt. It looks like the second line is maybe Together something. Next line in smaller script is Service Tools. Last row of etch appears it may be curved and starts with Lance, I think. This one has a couple of ripples tooth to back roughly where the etch is so may have to work on some straightening to easily clean around for more of the etch to be uncovered. I will have to post some pictures when I can get natural light. I have attached a picture of the helper handle that was on the saw when purchased. 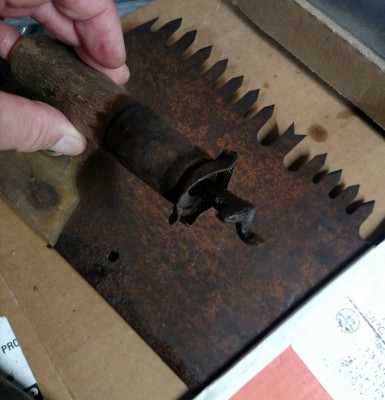 It is Wells, see picture of example etch. It may not be the same as yours.

I do not have much information on these saws but I have been told the big three saw makers made the saws for this hardware stores but they were not as high in quality such as fewer grinds and lower quality steel. This might explain why the Marshall Wells saw I have has the same tooth pattern as a Simonds 503. 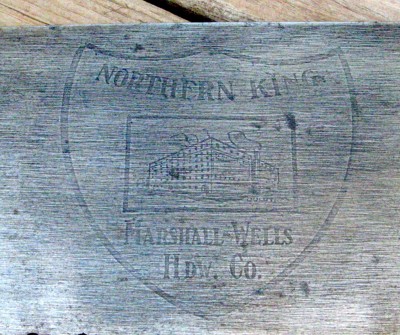