Got a trail project or crosscut saw training or certification course you want to advertise? Post it here!
BUTTON_POST_REPLY
36 posts

Hi Gavin and Brain, The horse is set for my height so at 6' 5" it has to be set very high. To lower it all I need is to adjust the cord at the bottom and it can be any height you want. It is just lug able and I take into the woods to saw trees up on site. It has in the past taken some very large trunks in its time. Also fine for 2 bucking if we do get movement,I just place a heavy log across the bottom. As to the saws when I start sawing I will take 3 saws with me. All with different teeth patterns. Which ever saw runs the best on the day I will use. You can have a newly sharpened and set saw come to a grinding holt for some reason,(on different wood no problem) when the saw I have been using for weeks glides through. So I think on the w/e we should try as many saws as possible and grade them say 1 to 10. If I might recommend a start time on Friday when we can all meet up have a cuppa and get to know one another, rather than getting in later and missing stuff. Regards Duncan
Top

Gavin Longrain wroteCOLON
I have a video camera. But even better, I have someone who knows how to use his I'll see if I can get him to come for several hours. I don't have LED lights - have you a suggestion for same? And a way to fix them to blades?


Magnetic LEDs are widely available for a couple of quid online, and if the magnet won't hold them i'm sure that a bit of impact adhesive would. If you can sort the video side I'll see what I can do about lights.

The last 2 saws are now in. 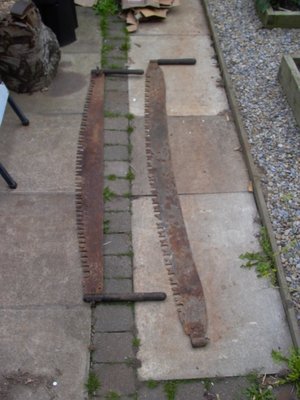 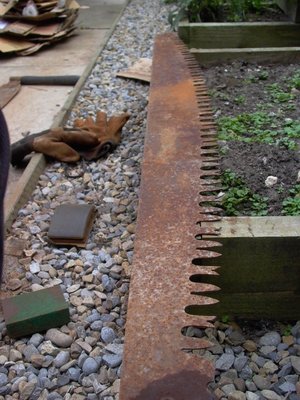 Very rusty but coming up fine.
Almost the same as the one that Pat and Dolly were using on a previous photo. (you can just see the smoke coming off the wood) 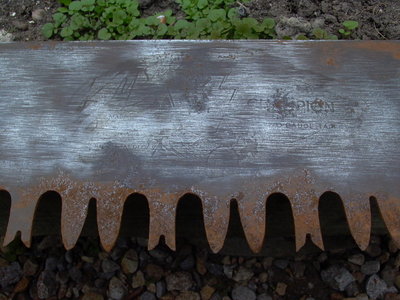 Then a 6 foot 6 felling saw with M teeth. 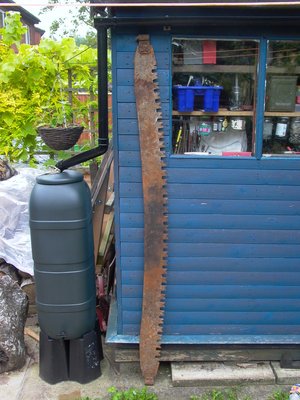 Made in Sheffield make unknown as yet. 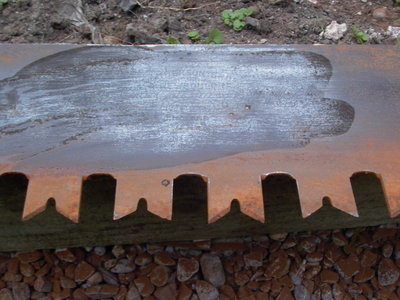 (a bit of a beast this one) Has been butchered in the past so will take a little time to sort out. They have taken far to much off the side walls of the tooth (for some reason) and now has poorly shaped gullets and a step cut into tooth.So both also are off to the skill share which isn't long now. Roll on October. Regards to all Sawman.
Top

The Dolly Vise was made today and will have its curved cut done in Scotland for the weekend course. 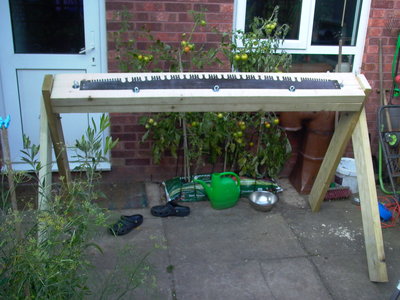 And a big thank you to Dolly for the plans and requirements to make her vise. 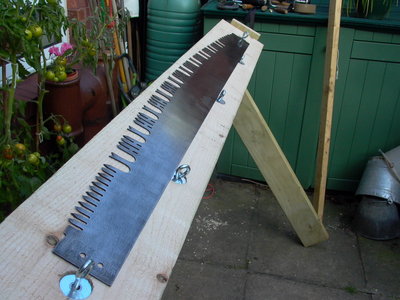 I made mine the same, and later modified it. I found I benefitted from:- My eye-bolts are all in one line. What is reason for having yours laid out as they are?
Top

Hi Gavin, the photo was just a quick snap at the end of the day and is in no way finished. Iam very pleased you said band saw, my little jig saw I know is not up to the job. I thought about putting cord at the bottom of the legs as I have done with my saw horse. Like old step ladders. I think I will go for loose bolts. Set it all up get alinement of the legs at the correct height and then insert extra bolt. As to the eye bolts. The wood is 9 inches and not 10inch as advised by Dolly. It was the only wood the saw mill had and time was pressing. I got the 2 best bits, but was concerned that the lower bolt when tightened it would open the "jaws" of the vise as the bolts are lower than I would like them. Also all my saws bar 2 are 5 feet and smaller so the will still fit. The 3rd reason is that I have tried to get the holding bolts along the axis of the 2 big planks. As there is a lot of weight and potential energy locked up there. If the bolts are set to low the weight is at the top and could rotate at speed, ever towards or away from the filer and with a saw in place. Not to good. If they are set to high the weight is at the bottom of the planks and it becomes harder to rotate and also flick back to the upright. So if the bolts are on the axis it should stay were it is put and only rotate with ease. Having said all that this is a very simple and effective vise and can be easily taken apart and transported. Also to make one is easy and well within most peoples capabilities. Many thanks again to Dolly for the design and any vise of her design made here in the U.K. will be known as the Dolly Vise. Regards Duncan.
Top
BUTTON_POST_REPLY
36 posts