Got a question? New to the forum? Feel free to post your questions here.
BUTTON_POST_REPLY
18 posts

Here is more detail on setting the teeth on an anvil as opposed to bending the tip of the tooth. I have seen it done and there is probably the less chance of breaking a tooth then any method of setting teeth. Has anyone else used this method? 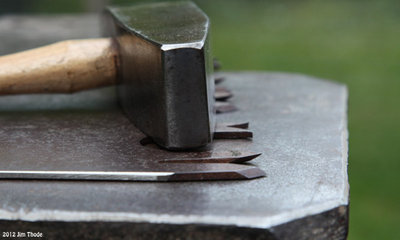 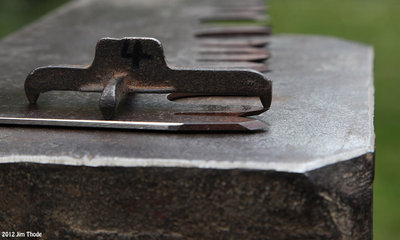 I think I will try that on one of my saws Jim. Interesting idea, and thanks for the photos too.

super interesting trick about the anvil setting. thanks a lot.
Top

Here is an additional note on setting teeth on an anvil. I found on a recent saw that by adding a spacer under the tooth that is being set that there is less chance of affecting or "un-setting" the adjacent teeth. I used a section of bandsaw blade about 5/8" wide x about 8" long so it supports the full width of the saw.

The method worked well on a very hard saw. When I got the saw it had four broken cutter tips (see photo) from when it was last sharpened maybe 70 yeas ago and I found another 5 or 6 cracked cutter tips when fling the cutters. I did temper the rakers but had no problem sharpening and setting the cutters without softening (tempering) them using this method. 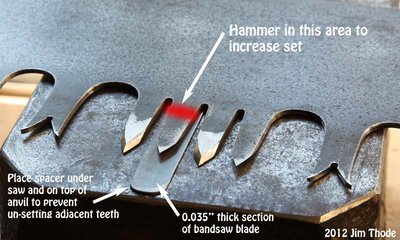 This is the saw that I started with: 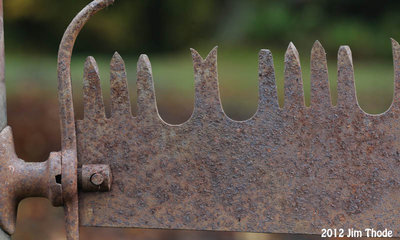 Setting a tooth at the base is like Wisking the tooth. Easy to put set in, but the tooth will chatter during the cut and leave small fibers extending into the kerf, which puts drag on the saw. Makes it harder to pull and tiring when sawing all day. That is the reason there are Perforated teeth on the saws. So they are stable in the cut. If the saw is short in the tooth, it is a great way of setting an old rust pitted saw. By the way, Great photos and descriptions!
John
Top

Jim, I have been hunting for a Sawyers anvil. Let me know if you have any leads. I haven't been able find much for anvils here in Colorado.
Top

John,
Thanks for the added info on setting teeth on an anvil, good points.

I have a 6' Simons 503 that was set that way when I got it and did not change it when I sharpened it. We have been using it that way for years and have not really noticed any disadvantage in fact even have won a sawing competition with it. With the 503's thick stiff teeth they don't seem to flex much but it could be more of a problem with a lighter saw. I could see that the consistency of set would be more critical with a saw that has the whole tooth bent for set. If a tooth had too much set it would drag more if the whole tooth was set as compared to just the point.

I had not thought about it but to set a perforated lance tooth saw this way, only the part above the supporting link could be set and that would be relatively short.


Treeline,
I see saw anvils once an awhile. Some times folks know what they are with and sometimes not. If I see a good deal, I'll let you know.