Got a question? New to the forum? Feel free to post your questions here.
BUTTON_POST_REPLY
4 posts • Page 1 of 1

What are some of the major factors in sawing frozen wood, specifically frozen hardwood (Beech, Maple, Birch, etc). I might be looking at sawing a respectable amount of potentially green hardwood after freeze up in Northern Maine and want to be prepared.

I have a couple of Simonds tuttle tooth saws (a 4 foot two-man bucking saw, and a 5 1/2 foot 315) which I gathered were for "hard and frozen wood" or something along those lines. They both could use a re-filing as they have been used intermittently and sat quite a bit for a little over a year-- so, tips regarding how a saw for frozen wood should be set, and rakers depth would be great too. I've only used these saws on green, quite unfrozen wood so I'm not able to draw on experience here.

Will you be sawing blowdowns with the possibility of bind or fireplace logs on a sawbuck? Frozen wood under compression will spit most plastic wedges, so you''ll need steel or aluminum ones if bucking BDs. Will you be single bucking? I'd consider bringing up my rakers to 0.008", as the teeth won't sink as deep into the frozen wood. I've cut enough frozen wood to know that you'll hear a different sound when sawing through it, almost like running your saw over glass -- kind of creepy.
Top

Probably both-- basically everything that cutting a winters worth of wood for a small cabin starting in November would entail. Probably single and double bucking both, but I anticipate the difficult cuts (in other words anything that isn't on the sawbuck) will be double bucked with the 315, and the bucking to stove length will be done with the short bucking saw (either single or double) or one of a few one man saws along with some big 42" "pulp" bow saws and bucksaws.

Good point on the wedges. Luckily I don't even have any plastic wedges, I always used the old metal saw wedges and found a few more recently.
Top

This is a broken Simonds 513 (I think) cut down to a 5' length, is my go to saw, and lives in my truck. We were sawing frozen hemlock in the blue ridge during last winter's deep freeze. The plastic wedge was all but useless and kept popping out of the kerf and our aluminum wedge was too blunt to get started in the narrow kerf. A thin steel wedge probably would have been the best choice for the day. Fortunately the blowdown was one with the earth, supported by limbs and didn't sag much. Not a lot of noodling, just little chips. Saw is filed 12/12.

Hemlock knots will chip an axe blade, but I have never broken a raker on one. I typically use the poll of my axe to break frozen limbs if possible. 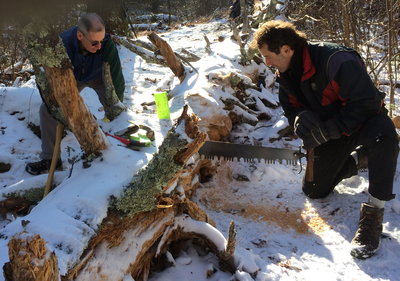